Premier Battles is back! After a controversial pre-season decision to cut two teams from the league, Shotty Horroh announced his return for the Apex card. Some battlers will be out to prove their team didn’t deserve abolishment and others will be hungry for a spot on the UK Battle Rap equivalent to Wrestlemania.

As Premier Battles blends conventions of football and professional wrestling, a UK Title is on the line. There’s also an exhibition match alongside the first chance for clubs to get points on the board. Podge Dwyer’s Celts face Bison Briggz’ Pride while Mandrill lead by P Solja square off against Joker Star’s Knights. 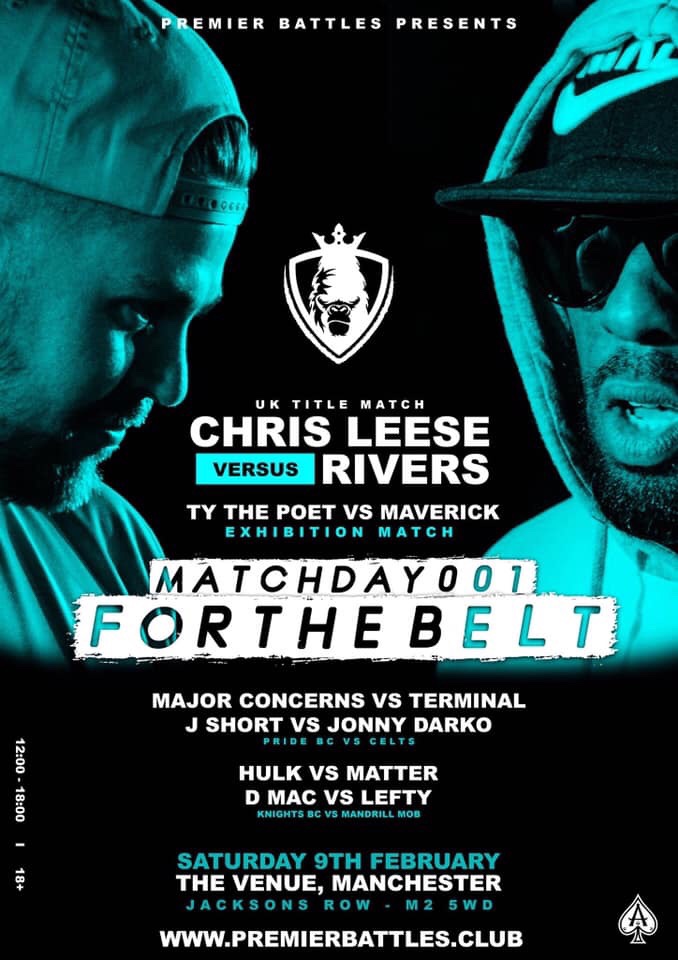 This exhibition match has been one of the most talked about on the card. I still think this should have the stipulation of getting a spot on the roster – but then thats largely because I have some bias towards Mav and want to see him on a team. I don’t think Ty is anywhere near the worst battler in Premier Battles and certainly has a lot of potential. I can’t see him getting a round of the Geordie favourite though – and I’m not the only one. Fortunately the lack of expectation means its a no-lose situation for the young Irishman.

This is one of the tougher match-ups to predict. The ambitious loud mouth who thinks he’s better than he is vs. an under-the-radar veteran who’s name is only really mentioned for his 2-on-2’s with Big J. There’s probably more to say about D-Mac, if Lefty wants to take this serious and go for the jugular, but I’m not sure thats part of the Londoner’s M.O. This is probably a good first match day for D-Mac, and I think he’ll take it.

Unpopular opinion time, I don’t understand the hype around Matter. I think it’ll probably be considered close by most but if I’m just talking personally, Hulk should ease past the Leeds man.

I’m genuinely interested to see how Celts do on Match Day 1. There was a lot of mention that Celts should have been scrapped alongside Wolfpack and Glory. Chances are they probably would have if it was based on ability alone but business dictated they were worth taking a chance on. Darko is decent and should be aware he has to step up to do twice the work for half the credit to prove himself worthy of a slot on the league. Unfortunately for Jonny he’s coming up against one of the more underrated rappers in the league, and someone I think will pick up more Ws than most this season. J Short to win.

Much like Jonny Darko, Terminal will be expected to step up in this battle. Not for himself, but for his club. I expect Terminal to be to Celts what Rivers was to Glory last year. Major Concerns proved himself as a future star in last year’s Academy and will make this a close battle but I think Terminal has enough about him to best MC in a close 2-1.

More than anything, I’m looking forward to seeing how Single Title Matches work in a Team Based Format. For the sake of Sharks, neither battler should want to body their opponent because that’ll be an easy angle for opposing teams. At the same time, neither man wants to lose – and I can’t imagine either Chris Leese or Rivers care that much about each other or their club over their own personal goals.

Rivers winning would tell a better story, and we know Shotty Horroh is a fan of narratives – but he’s also the easier target here. The club he tried so hard to fight for last year were deemed not good enough this year and I expect Leese to take full advantage of that. If there’s one thing Chris Leese is good at, its savagely taking the piss. Rivers is probably a better writer, and all-round battler for that matter, but because of the circumstances surrounding the battle I think Chris will take the UK Championship.