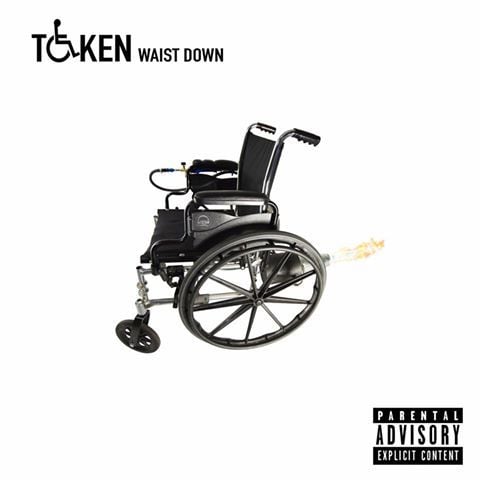 Massachusetts’ Token is one of, if not the most talented teenager in the rap world. Having shot to internet fame with his ‘No Sucka MC’s’ content entry, he’s managed to maintain momentum with the ‘Still’ follow up, working with Joell Ortiz and killing his ‘Sway In The Morning’ freestyle. Now, he’s released his first official single which can be purchased through iTunes etc., and this should prove as to whether the hype is real, and if those YouTube views can be transferred into fans who are willing to purchase the young MC’s music. ‘Waist Down‘ could finally be the track that matches, or even tops ‘No Sucka MC’s’ – especially with the extended cut.

Prior to the extended cut of ‘Waist Down’ I was torn. There were some really great bars and Token’s technical ability to spit is unquestionable…but there were some corny things in there too. Not even necessarily the Wheelchair with the jet engines, but more so the “don’t give a fuck” / “paralysis” scheme. It’s an unfortunately easy comparison to draw, but it felt like they were recycled Slim Shady lyrics. Ignoring the hook, and listening without the video, ‘Waist Down’ still showed Token’s phenomenal potential to one day become one of the pillars of the rap genre – but the extended cut changed it all.

Almost pre-empting the reaction to his more comical record than usual, Token takes aim at ‘fake’ fans who only want to see him making the same type of music which doesn’t typically sell a lot. It’s reminiscent of both his own ‘Stay Humble & Stop Thinking’ track and also Alyssa Marie’s ‘No Strings Attached’ – albeit on steroids. The extended cut verse is angry and aggressive, Token’s voice straining with the emotion behind his words – and that’s the true beauty here. Whilst the intelligence behind the record in incredible, as is his ability to make people more-so fans of him because he’s dissing them – it’s the fact you can tell how passionate he is about his craft, and determination to become a success story that truly made ‘Waist Down’ such an enjoyable track.

He is completely right, at 17 years old he should be able to have fun with his art. ‘Waist Down’ exposes the hypocrisy of the Hip Hop critic – myself included. It is also however testament as to how one verse can completely change an entire perception of a song. I’ve gone from wanting to support the track, whilst not completely loving it, because I’m a fan of Token, to playing the song on repeat on the basis of a handful of extra bars. Brilliant.

The more you dislike the original track – the more you should listen to the extended cut.